Welcome to Cave Animal of the Year 2020

Amidst great excitement we launched our 2020 program on 1 December 2019. Cave Animal of the Year commenced in Germany in 2009 and Australian Cave Animal of the Year was launched in 2019. In 2020 there will be programs in Australia, Germany, Italy, Switzerland and the USA as an effort grows for people to take note of these interesting and little thought about creatures.

Why the fuss about cave animals?

People marvel at the beauty of caves. But show people a photo of a small creature with long limbs and long antennae and they will generally wince. They may even declare an intent to squash the animal to death! Hidden away in caves are small, often strange-looking animals who have adapted to living in a world of blackness. Worldwide, there are many species of animals that live in caves and Cave Animal of the Year seeks to increase awareness of these fascinating animals and the importance of caves as their homes.

Meet our Australian Cave Animal of the Year 2020.

Australian cave crickets are wingless insects and can be found in limestone, larva and granite caves in both moist and dry areas. They can often be seen in the entrance areas to caves. Be sure to ask your guide about them if you are on a tour at one of Australia’s amazing public show cave sites.

Getting to know our cave crickets.

Antennae which can be more than twice the length of their bodies are the most notable feature when looking at a cave cricket. These long and very elegant-looking antennae allow cave crickets to detect food, mates and predators by sense.

Cave crickets typically respond to perceived predators by jumping towards them. A cave cricket’s jump is akin to a dog’s bark or a lion’s roar. It might not intimidate a human being in a cave, but it might put off a predator that might otherwise snatch the cave cricket for a meal.

Crickets eat both plants and animals, and perhaps even their own leg!

Food is limited in the cave environment and cave crickets can’t be too fussy about their diet. Their menu includes plant material and animals both alive and dead, including injured cave crickets. They generally leave the cave at night to forage for food in the above-ground environment. Cave crickets store protein in their hind legs and, if food is scarce, they may eat one of their own hind legs. (They may also sacrifice a hind leg to evade predation by another animal. Survival is key.)

By feeding outside the cave, they bring energy into the cave and cave crickets are described as a ‘keystone’ species for life in the cave, especially in caves without resident bats. Both the crickets themselves, as prey for other species, and their waste become part of the cave food-chain.

Teeth for digging with?

Female cave crickets have a structure called an ovipositor between their hind legs and deposit their fertile eggs from this. The eggs are the size and shape of a grain of rice and a single egg is deposited into a small hole dug into the cave substrate. The ovipositor may have up to seven small ‘teeth’ and with these the female can dig her ovipositor into the rocky cave substrate to deposit her egg.

Other types of crickets might chirp, but cave crickets do not, and cannot. Everyday male crickets chirp because it's a mating call, to attract a female. They do this by rubbing their wings together. Cave crickets do not have wings and are deaf. Instead male cave crickets use abdominal vibrations to signal to females in courtship.

Our posters, bookmarks and stickers are works of art and our 2019 products all won competitive awards. Thanks to our design team for their creative efforts. Our 2020 products are just as stunning but be quick to order as our supplies are limited.

Bookmarks and stickers are free of charge and readily available. The cave crickets are a gorgeous pink in colour and 'raised' on the bookmark. You will love them. As you read yourself to sleep at night, the bookmark will have you pondering the lives of cave crickets as they leave the caves at nightfall to seek food in the moon-lit world above.

Our award-winning poster can be supplied if you can display in a public site. Outdoor gear shops, libraries, school science labs, Scout and Guide halls and the like would all make great display areas. We would love to hear from you if you can display a poster and so help tell others about the wonders of cave animals.

Our tea/coffee mugs are adorable and will brighten up any day. Just $10.00 plus postage. What could be easier than having a cuppa to increase awareness about cave animals with your friends and workmates. Or a great gift for an animal loving friend.

For all merchandise orders and enquiries please contact us at: @email

Some other interesting references are: 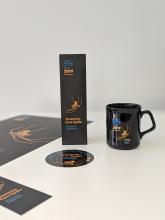